Skylights: Illuminate your life, but don't get burned

Skylights: Illuminate your life, but don’t get burned

Skylights: Illuminate your life, but don’t get burned
Posted by Dan Winklebleck on November 21, 2014 in Construction Components, Design Advice
1 Comment

Skylights have come a long way from the days of big white acrylic domes poking up from the roof of your house like a giant skin blemish. Pretty disgusting in both imagery and reality. Some people seem to have fears surrounding skylights. I have gotten asked again and again “won’t they leak?” or “won’t they make my house hot? My answer is: Not if they’re installed properly. Like most things, it’s dependant on designer, roofer and contractor to make sure skylights are designed and installed to work optimally.

One of the goals I have for almost all of my remodel designs is daylighting – basically once the project is complete, people can live in the house without turning on a light during the day. Although this is not always possible, it is something I aspire to. Happily, I have been able to accomplish this goal frequently. .

My favorite place to start adding skylights is in hallways. A hallway is often the most dark, cramped and usually…pedestrian space in a house. The addition of a skylight or two can utterly transform the character of an otherwise unremarkable space. This will often contribute light to adjacent bedrooms, that tend to be darker. My other favorite location to place a skylight is over a kitchen island. If there is no island then just centering the opening in the middle of kitchen works as well. This brings lots of natural light to the most used workspace, providing much needed illumination to the surrounding kitchen. Kitchens often have a small windows anyway, to allow for more cabinets and a skylight can make up for the deficiency of natural light.

Skylights can be problematic. There really can be too much light, heat, or a harsh sun track across a space. This can be hard on the eyes and even fade interior finishes and furnishings. Much has been done with glass and shades in high quality skylights to counteract many of these problems. This is a good start, but it still falls to the designer of the space to understand and evaluate several considerations. In my opinion the ideal skylight design, is one that provides lots of reflected, ambient light, but essentially never allows the sun to shine right in. A skylight “chase” is the light well that run through an attic between a ceiling and a roof opening. If it is tall enough, these chase walls can create important surfaces to block and reflect sunlight. Sometimes this is impossible, so we must resort to shades that can block virtually all the light, allowing a skylight where they would otherwise be impractical. Fortunately the top manufacturers understand this, and recently invented solar powered remote control shades for just such locations. This allows you to open the shade just a crack or wide open depending on the situation.

The most important considerations affecting skylight function are: roof orientation, distance from roof to ceiling surface, roof aperture, ceiling aperture, and chase shape. Sound complicated? It can be, but by managing these factors I can usually tailor the skylight to provide adequate light without overdoing it.

The spaces I design never look like a skylight manufacturers brochures, and for good reason. Advertisments always seem to show multiple large skylights in a space, recommending an almost greenhouse approach. Its like parking your car in the sun, but hoping it will remain cool. Not likely! I have been told that skylights admit about 3 times as much light as and equal sized window. I’ve never seen any scientific data on this, but it seems like a reasonable rule of thumb in practice.

Sometimes I encounter locations in a house where traditional skylights are just not possible. Usually the combination of roof configuration, and wall locations below won’t allow enough room to make it work. Fortunately that situations is uncommon, but there are other options. In recent years tube skylights have become a popular alternative to traditional “built” skylights. I think there is a place for both, in the constellation of possibilities. Admittedly, I’m a bit of a snob where skylights are concerned. In general I don’t like the look of tube skylights, but they do meet my ideal criteria, and they are substantially cheaper. In a pinch, I’d opt for tube skylights, but generally I only spec them in secondary spaces. I think they are perfect for closets, laundry rooms, and similar non public spaces. In some circumstances I’d also put them in interior baths and even occasionally in a bedroom. Faced with a choice between a tube, or no skylight at all, I’ll take the tubes every time, even if they do lack architectural interest. I’ll discuss these more in a later post.

I once did a large remodel design, nearly a mansion. I designed a wide and rather long hallway accessing bedrooms; not so unusual. I arched the ceiling of the hallway, making it about 10 feet tall. It would be a bit like a tunnel running from the entry, back to the bedroom area. The final thing I did was to add three skylights in the hallway at regular intervals so that they would cut through the arching ceiling. This reinforced the arched aspect, by creating many curving edges where the skylight openings intersected the arched ceiling. This also took advantage of the natural perspective in the space. At one point while still working on the plans, the owner came to me and said they had decided to eliminate the skylights to save cost, and use artificial lighting instead. I said to the owner (and I quote) “I beg you not to do this” because I knew what a loss to the design that would represent. After some discussion she changed her mind, and the skylights was installed as designed.

After she had lived the the completed home for a while, she called me and confessed that the hallway had become her favorite space in the house! A hallway! This demonstrates the power of skylights, properly designed and placed. She never has to turn a light on in that space while the sun is up. That home truly fulfilled the potential for leveraging what skylights have to offer in terms of natural illumination and style. 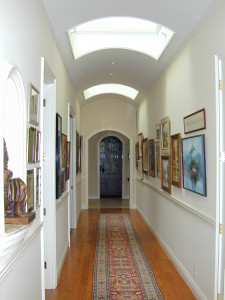 Leave a reply to whisk Click here to cancel the reply